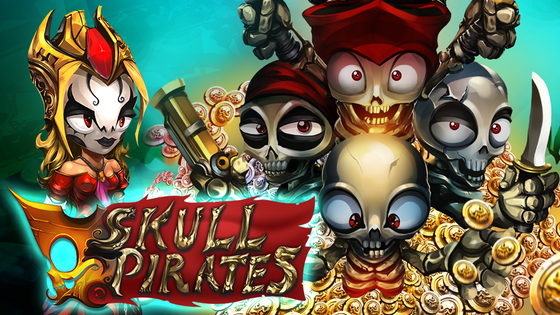 Latest Updates from Our Project:

As promised, this week we're showing off the box art for the Captain's Edition of SkullPirates. So, without further ado:

As you can see, the collector's box for the Captain's Edition will feature a painted scene of Skull Queen and her bony buccaneers fleeing from a very angry assortment of Catannian security forces. Here's a closer look:

We're incredibly happy with how the design has turned out and we hope you like it as much as we do.

Thanks again for supporting SkullPirates!

Just another quick update as we close in on the end of the second week of the campaign. After we launched the campaign's stretch goals, we heard from a lot of you that you're much more interested in pursuing the expansion of the game's ship combat element than the addition of voiced dialogue.

After discussing it among the team, we're with you. As much as we want to get our characters voiced, we're able to put that on the back burner. So, we've made an adjustment to swap these two stretch goals. We'll now include the ship expansion should the campaign attain $60k in funding, followed by voice acting at $80k.

Next week, we're going to be showing off the final art design for the Captain's Edition box! The team is putting the finishing touches on it right now and we're really looking forward to sharing it with you.

Have a great weekend!

Just a quick update today because we're all still recovering a bit. The team just got back from an awesome weekend at the PlayStation Experience event in Anaheim, where we showed off the first playable demo of SkullPirates on PS4. It was super cool to see people try out the multiplayer and we've come away with some fresh ideas for how to make the game better. We had a great time meeting with fans and appreciate everybody who took time to come by and say hello.

Since our last update, we've cleared our first stretch goal, securing the addition of the optional dungeon "Inside the Crabby King" to SkullPirates. Huzzah! Thanks to everyone for helping us get there! As expected, the campaign's progress has slowed but we're still growing and think there's still a great opportunity to get those further goals achieved. Let's keep it going!

There is one more quick bit of the game that we wanted to show. We know that some of the most ardent support we've received, both in this campaign and in general, comes from the passionate community of devoted Vita players. So, we wanted to do something special with them in mind and show the first footage of SkullPirates running on the handheld. Enjoy!

That's all for now. Thanks again for your support of SkullPirates!

As promised, we're introducing stretch goals! Here's a rundown of the three things we'd like to work toward adding to the game next:

We hope you're as pumped about these new project milestones as we are. We're very cautious about limiting stretch goals to content that will not extend the development time beyond the promised release date of October 2018 and these will all fit into our plans to meet that objective.

A Note Regarding the Captain's Edition

There is a second significant change to the campaign happening today. We are expanding the production run of the Captain's Edition of SkullPirates, increasing the number of total copies for PS4 and Vita to 500 and 600, respectively, and have introduced a new set of tiers backers may select to claim the additional copies.

We understand that some backers may be displeased by this decision and it's not one we made easily. The very limited quantity (and thus rarity) of the package is a significant part of its appeal. It's a cool thing for us, too, having something like that out in the world. So, we want to take a moment to give some insight into why we're making this adjustment.

It's a simple fact that we underestimated demand to a considerable degree. How considerably started to dawn on us roughly five minutes after the project went live; a dozen Captain's Editions had been claimed and we hadn't even told anyone yet.

From a strictly capitalistic point of view, it's a sin right up there with taking the first offer you're given in a negotiation. But we were perfectly happy with the outcome regardless of the obvious lost potential sales. We had an expectation that the Captain's Edition would sell out because the quantities were so low and that there would be some demand that was unmet in the end, but it was a number that worked for us. We could be confident they would move, allowing us to fund the project and put us in a good position to work toward some wishlist items over the remainder of the month with pledges for standard edition and digital copies. For us, what happened was as good an outcome as we could have hoped for. But it's not all about us.

As you know, we're working with eastasiasoft on this campaign to produce our physical copies, including the Captain's Edition. They've truly been an exceptional partner and we could not be happier about the level of support we've received from them throughout this process. And while they're as excited as we are about the success the campaign has had, that success has caused a bit of an issue for them.

eastasiasoft serves an avid collector's market in Asia. Based on our expectation for the project, we anticipated that we'd have an early rush on copies that would peter out until morning in Asia some twelve hours later, at which time eastasiasoft would alert their customers there about the campaign and we'd see another wave. As it happened, by that point, it was already too late and those customers are understandably upset at not getting a fair opportunity to secure a copy.

We screwed this up and, with everything that eastasiasoft has done to ensure the success of the campaign, it doesn't feel right to us that they should have to face a horde of angry people because we got it so wrong.

Obviously, we also want to respect all of you, the backers whose support allowed us to achieve the success we have. Even with the increase, the Captain's Edition will remain one of the lowest print runs in the PS4 and Vita libraries, but you got here first and that should count for something. So, we've arranged with eastasiasoft to ensure that the first 250 numbered units for each platform will go to the backers who pledged for the original set of tiers.

If this turn of events has made you uncomfortable, we completely understand and respect that. The success of crowdfunding campaigns are largely contingent on trust and transparency and we want you to feel confident in your decision to support us.

Thank you again for your support and for your understanding of this issue. We'll be back soon with more cool new stuff to show.

First, another round of thanks

When we kicked off SkullPirates on Friday morning, we had no idea that the campaign would immediately reach its funding goal. But here we are, getting close to doubling it in just a few days and it's all thanks to you. We're incredibly humbled by the support we've received from our backers and thrilled that so many people are excited about the project.

So where are we going from here? We have a few ideas for cool stuff we'd like to add to the game and there will be stretch goals. We're still sorting out a few things (we really expected to have a lot more time), but we'll be announcing new goals for the project in another update tomorrow. I'm a tease, I know.

Oh, here's one thing we can confirm today. People have been asking if SkullPirates will feature a platinum trophy on PSN and, yes, we will be having a platinum for all the trophy hunters out there.

We'd also like to start showing off more of SkullPirates and we're going to start today with a look at one of the game's major characters, Sharktavia.

Sharktavia considers herself to be a better class of predator. A shrewd member of the criminal underwater, she's known for two things: Never buying off the rack and never letting anyone skate on a debt. Especially not some two-bit pirate wanna-be.

It took a little time to track Skull Queen down, her loan racking up interest all the while, and the amount she now owes Sharktavia rivals the lifetime earnings of an upper middle-class family (with two incomes). So when Sharktavia finally did catch her near the coast of Catannia, Skull Queen hastily suggested that she was on her way to conduct the biggest heist in the history of the twelve seas.

While The Coccyx Avenger would make a fine trophy, it's certainly not going to cover the debt in full. And Sharktavia is amused by Skull Queen's idea to loot an entire national treasury in order to pay back the loan, so she's decided to let her give it a shot.

She can always eat her later.

That's it for now! We'll see you with some new stuff tomorrow!